Skip to content
Secular Franciscan Order at St. Stanislaus Parish ~ Living Word Fraternity
Is Jesus calling you to a more intimate, Franciscan relationship? Did you know that there is a multi-parish Secular Franciscan Fraternity which meets monthly in St. Stanislaus Parish?  The SFO is an 800 year old lay order founded by St. Francis of Assisi.  Franciscans are dedicated to bringing the “Gospel to Life – Life to Gospel” by word and example in our homes, workplaces and parishes.  We meet the 2nd Sunday of each month from 12 – 4pm in the Msgr. Cahill Room for prayer, discussion, and study to encourage justice and peace, integrity and creation – for all of God’s creations and creatures.   If you are interested in pursuing this vocation, you must be a practicing Catholic in good standing in the Church, at least 21 years old, and accept that profession means a life-long commitment to the Franciscan way of life.  For more information, please contact Cindy Louden, ofs – cllouden@verizon.net. 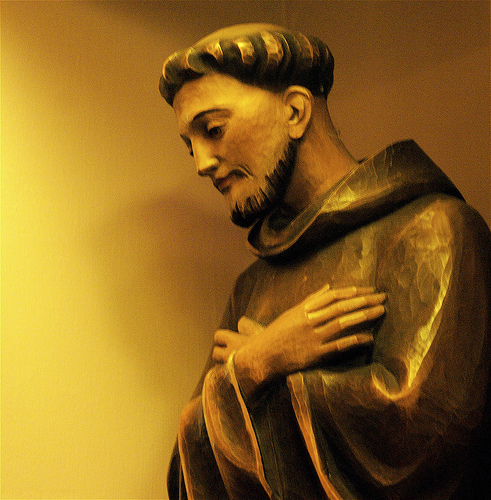 Everyone thinks that they know the “birdbath” saint in the garden  —  that Italian fellow, Francis of Assisi. You know, the one who wandered about preaching on street corners.  Wore a brown habit and sang songs to the birds, didn’t he?  Yep, he’s the one.

Giovanni Baptista Bernadone was the oldest son of a cloth merchant whose frequent travels to France made him nickname his son Francesco, the only saint canonized under a nickname.  His mother Pia was from Provence in Southern France, an area known for its light-hearted songs.   As a rich young man about town, Francis became the leader of the party-crowd.  He longed to be a knight doing great deeds so his father outfitted him with a horse and armor.  Unfortunately, Francis gave all that to a needy knight, managed to get himself caught in a war, and was imprisoned for a year.  When he got back to Assisi, he was ill for two years with a debilitating fever that robbed him of his zest for life.  Today we might call it Post Traumatic Stress disorder.

Then, the poor fellow heard a crucifix speak to him.  Christ asked him to rebuild His church so Francis went out, got some stones, and started to repair the actual church.  Of course, he “borrowed” some of his father’s fabrics to sell to get the money but it was for a good cause, wasn’t it?  When his father objected, Francis renounced both his father and his father’s wealth. Poverty was his chosen way to imitate Christ.

That’s the short version of his life.  The long version is continuing in Christ’s church today because this simple man from Assisi has affected the world in ways that only a great saint can or could. His love of Christ led him to live a life so Christ-like that Francis was granted the dubious blessing of the stigmata – the outward representation on his body of Christ’s wounds.

His love of Lady Poverty allowed him to reach out to all people, to all creatures, to all nature itself, telling the stories of God.  Speaking in his own Italian rather than formal Latin, Francis told people how much God loves them and he is telling us that today.

Who are Secular Franciscans?

The Secular Franciscan Order (SFO) is a branch of the worldwide Franciscan Family. We are single and married.  We work, worship and play in the community where we live.

The SFO is a secular movement, established by St. Francis of Assisi more than 800 years ago. Our purpose is to bring the gospel to life where we live and where we work. We look for practical ways to embrace the gospel in our lives and try to help others to do likewise.

In today’s world we are plagued by time schedules, projects and activities that leave us tense and stressed.  The SFO becomes our place of refuge and renewal where our brothers and sisters in Francis support and inspire us. You, too, can become a life-time member of our family — if God is calling you.

What do Secular Franciscans Do?

Secular Franciscans follow the SFO rule that requires us to spend time in community with our Franciscan brothers and sisters.

We gather at least monthly. We support each other through the ups and downs of daily life. We pray together. We take opportunities to learn about our Church, our community and our world.

Our rule mandates us to be involved in apostolic ministries and with youth.  When we are called to action, we embrace the call joyfully. Some of us are religious education teachers, some have a special ministry to animals, some have made a commitment to Perpetual Adoration. Some work with the poor and lepers halfway around the world.

Is the SFO for you?

If you have a Franciscan vocation, you probably have a desire to do something more. Perhaps you feel a need for support in growing spirituality. Or, deep down, you sense a need to serve God in a special way. Or, for years, you have felt an affinity with St. Francis. He seems to pop up all around and you just don’t know why. Perhaps, God is calling you!

Getting to know the SFO better may be a way to determine if you have a vocation.

You’ll have plenty of time to get to know us before you make any commitment. The SFO requires three months of orientation and six months of inquiry. During that time, you’ll come to our monthly gatherings and have a few informal classes.

Local SFO Information: Stop by a meeting and introduce yourself!

Meetings take place on the 2nd Sunday of the month from 11:30 am – 4 pm (the third Sunday each May) at the St. Stanislaus Parish Center.

The Living Word Fraternity in Lansdale is one of several fraternities in the St. Katharine Drexel Region of Pennsylvania and one of over 1200 in the United States. When you become a Secular Franciscan, you can visit any of our fraternities as a brother or sister in Christ and in Francis.

To speak with someone about the Secular Franciscan Order and to meet the family, stop by at one of our regularly scheduled meetings. Call Cindy Louden at 267-421-6203 or email her at cllouden@verizon.net.

St. Thomas belongs to that class of Third Order Franciscan Tertiaries who have grasped the true spirit of their Seraphic Father.  It is a spirit of deep-seated piety and of contempt for the world, as well as of unswerving fidelity to Holy Church practiced in an exceptional degree and sealed with one’s blood.
His father was a knight.  Thomas was born in London in 1480.  Having been a very devout youth, he became a lawyer.  His services were constantly in demand, but nevertheless he always found time to attend holy Mass daily and to perform other pious practices.
As the father of a family, he was concerned that his children should be reared in the fear of God.  He became famous for his book entitled Utopia.  By means of his “Kingdom of Nowhere” he scourged in fine satire the evils that were eating their way into the Church and the State.
Through Henry VIII he became attached to the royal court and was finally appointed Lord High Chancellor.  The time had now arrived in which the Tertiary was to manifest how sincerely he had grasped the spirit of the Saint of Assisi.  As was to be expected, even as a statesman Thomas More continued to make his accustomed religious practices.  He set aside every Friday as a day of introspection.  His charity was without limit.
He experienced special delight in serving the priest at holy Mass, and he received holy Communion daily.  He was told, by way of reproach, that it was unbecoming for a layman with so much work to do and so many distractions to communicate daily.  But he replied: “You are advancing the very reasons for the need of frequent holy Communion.  If I am distracted, holy Communion helps me to become recollected.  If opportunities are offered me each day to offend my God, I arm myself anew each day for the combat by the reception of the Eucharist.  If I am in special need of light and prudence in order to discharge my burdensome duties, I draw nigh to my Savior and seek counsel and light from Him.”
But it was not long before his doom was sealed.  Blinded by unholy passions, King Henry divorced his lawful wife and married Anne Boleyn, a lady in waiting at the court.  When Rome justly condemned his adulterous act, the king severed his connections with Rome and set himself up as the head of the Church in England.  Whoever disapproved of his conduct was doomed to die.
The first person who opposed the king was his loyal chancellor, Thomas More.  He was cast into prison.  There he wrote a pamphlet entitled Death Endured for the Faith Need Cause No Fear.  When his wife endeavored to persuade him to give up his opposition and prolong his life, he asked her just how long she believed he would still live.  She answered, “At least twenty years.”  “Indeed!” said Thomas More.  “Had you said a few thousand years, that might make a difference.  But surely even he would be a poor merchant who would run the risk of losing an eternity for the sake of a thousand years.”  He was beheaded on July 6, 1535.
Pope Leo XIII beatified this great Tertiary, and Pope Pius XI canonized him on May 19, 1935.
ON LOYALTY TO CHRIST
1. Remain loyal to Christ by the way you live.  Christ, however, “began to do” (Acts 1:1), and then He went out to teach.  Thomas More, His faithful servant, acted in like manner.  His whole conduct showed that he belonged to Christ.  He often remarked: “There are many people who purchase hell at so great an effort that one half of it would be sufficient to win heaven.” — Manifest to the world by a good Catholic life that you belong to Christ.
2.  Be loyal to Christ by your love for the Blessed Sacrament.  Faith taught Thomas to behold in the Sacred Host Him who said: “This is My Body!” It was, therefore, his greatest delight and duty to attend the holy Sacrifice daily, to serve the priests of Christ, and to receive Christ in holy Communion. — Can this also be said of you?
3.  Be loyal to Christ by your loyalty to the Church.  She is the living Christ and loved by Him even unto death (Eph 5:25).  St. Thomas refused to swerve a finger’s breadth in his loyalty to his Church even though his fidelity brought him prison and death.  —  Beg St. Thomas for like fidelity, and you will share with him a like reward.
PRAYER OF THE CHURCH
Almighty and eternal God, grant us, we beseech Thee, that we who celebrate the festival of Thy Holy martyr Thomas, may through his intercession, be firmly established in our love for Thee.  Through Christ our Lord. Amen.
from THE FRANCISCAN BOOK OF SAINTS
edited by Marion Habig, OFM   Copyright 1959  Franciscan Herald Press
used with written permission from the publisher

Our current bulletin
To have the bulletin emailed to you, sign up for our weekly email at the bottom of this page.

To view Archbishop Pérez’ Nothing Compares to Being There video invitation, please visit youtube.com.

For the pastoral care of the dying, priests are available after office hours by calling 215.368.0220